If the hippies of the 1960's-'70's Jesus movement revival had not gotten hold of contemporaneous musical Christian expression when they did-and had the business infrastructure for the music would up supporting it- groups like Forever Be Sure could be what's now considered contemporary Christian music. And that might not be such a bad thing at all.

Forever Be Sure, one of whose albums I reviewed here a couple years ago on the occasion of their being the opening act for a speaker for a rally held by Milwaukee's VCY America radio and television ministry, is a more of a rotating collective than a fixed group. Twenty singing members, not counting a couple of administrators, are pictured on the act's website. https://foreverbesure.com/ Some pictures of their performances there show combinations of three to five members, occasionally co-ed in makeup but never all men, with the occasional member applying herself to piano or violin.

It appears in the same site's downloadable promotional materials that FBS is currently comprised of four ladies. The same quartet pictured there is who headlined a VCY rally of their own at the same venue where they were an opener in 2016.

If the hippies of the 1960's-'70's Jesus movement revival had not gotten hold of contemporaneous musical Christian expression when they did-and had the business infrastructure for the music would up supporting it- groups like Forever Be Sure could be what's now considered contemporary Christian music. And that might not be such a bad thing at all.

If it's possible this far into the 21st century to be fully part of pop music's sonic realm of melodic hooks and ear-worming arrangements while being heremetically impenetrable to the influences of rock, e.d.m., R & B, hip-hop, country and possibly every other genre currently given commercial radio play nowadays, FBS may well have achieved this seemingly curious feat, being no less vital and compelling for it.

Heather Schopf. composer/arranger/co-founder and onstage constant of the ensemble throughout their various touring iterations, may balk at her music being at all associated with pop. Still, it's consistently catchy as anything one is going to hear on K-Love, and, hey, they have a YouTube channel https://www.youtube.com/user/foreverbesure packed with worthwhile concert and comedic concept videos. Within their economy of scale and aesthetic conservatism, Schopf has learned from pop to market her music. More power to her on that. 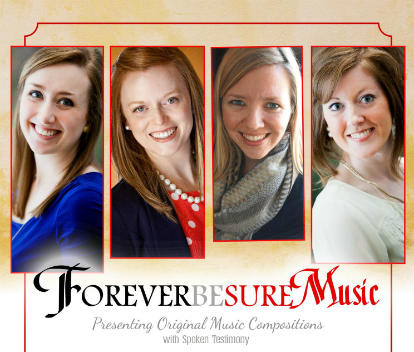 And kudos to the other three Sure'rs sharing the Waukesha Expo Center stage with Schopf on a pre-Reformation Day Saturday , too, for that matter. Through mostly background-track accompaniment, a couple of those videos and Schopfs performance while the donations buckets were being passed of an instrumental electric piano medley of songs about seeing Christ, the quartet went through about 15 songs. Schopf did most of the talking but allowed for Stacie James, Jessica Dexter and Carolione Sykora to each talk a bit about their families and backgrounds apart from their contributions to FBS. Schopf, a pastor's wife with a biblical studies music college degree and history of giving piano and voice lessons, clearly appeared to be the leader, but one among talented equals.

As likely should the head of any assemblage themselves a ministry specializing in music to edify believers, Schopf writes songs well informed by Scripture and poetic resonance. Whether the declarative praise of "Something To Sing About" or springboarding from a Bible account of one of Christ's earthly encounters, as on "Where Are The Widows?," her work balances reverence with an approachability that isn't unafraid to occasionally be outright fun. With that in mind, FBS' closest affinity to any kind of 20th century pop music may be to the pre-rock 'n' roll, jazz-inflected harmonizing of The Andrews Sisters. Still, the traditions of their denominational backgrounds' Baptist hymnody and classical training (at least on Schopf's part) will likely forever be sure to keep their work from being mistaken for Cassandra Wilson.

That's no kind of dismissal of their work, though. Since Point Of Grace's run of radio biggies has been over for a while, it's probably been about as long since any similar kind of female harmony has been heard consistently in contemporary nor conservative Christian music circles. For that reason alone, Forever be Sure merit a wider hearing.

And in U.S. cultural Christendom where cultural Marxism continues to encroach, these gals' politically incorrect sense of humor makes a welcome respite from all that psychic oppression. That's most evident in the video for "The Drip, Drip Song." Based on Proverbs 27:15 admonition to contentious women of Proverbs 27:15, the ditty, sounding like a medieval madrigal gone askew. It is accompanied by the ladies portraying cliche's of housewives kvetchnig to their husbands, each verse starting with a soon-to-be-made moot, "Darling, you know I love you..." The other clip they showed, for "Every Little Blessing," consists of quick portraiture cuts of-what else?!-blessings in the ladies' lives. If doughnuts are conspicuously highlighted among those blessings, Schopf copped to the starchy, fried morsels being a weekend ritual at her house.

Forever Be Sure are serious about their music and the One they honor with it. Though it would be wonderful to see them with the full instrumentation on their albums (none of which features any pictures of who's singing on them), even on this mostly track-backed Expo date, they shined with artistic and ministerial sincerity.