In its 13th year, the Voices of Peace and Peace Church (Evangelical and Reformed), Potter Gospel Music Festival is an ideal of sorts for this kind of event.

Voice of Peace (VoP) isn't wholly about Southern gospel, but that's its primary thrust. Believe it or not, in a northern state such as Wisconsin, there's a strong following for the music, seemingly comprised mostly of older adults from small towns. The fest itself is named for a trio from nearby Potter who perform in that style with acoustic guitar and keyboard. Points northerly like Iowa, Michigan, Minnesota and Washington State are also home to Southern gospel acts brought in for this weekend. A total of 17 groups and soloists played at least two six-song sets each to fill 49 time slots.

The two-day, one-stage event held the third Friday and Saturday of August is free to attend, but an advertising-laden program booklet costing $1.00 and free will offerings provide funds. Most acts on the bill are put up for the weekend by local churches and minister in their sponsoring congregations' services that Sunday. Food is sold by local churches and service organizations. Every artist has a booth or table to sell their wares, but the hype level registers in the single-digit zone.

Attendees can sit on benches and picnic tables in the quaint, bucolic setting of  the civic park in Hilbert, WI, a village of under 1,200 population conveniently within a 90-minute drive from cities including Green Bay, Appleton, Sheboygan, Manitowoc, and Fond du Lac. Those wanting a closer view, however, will want to pack a lawn chair. 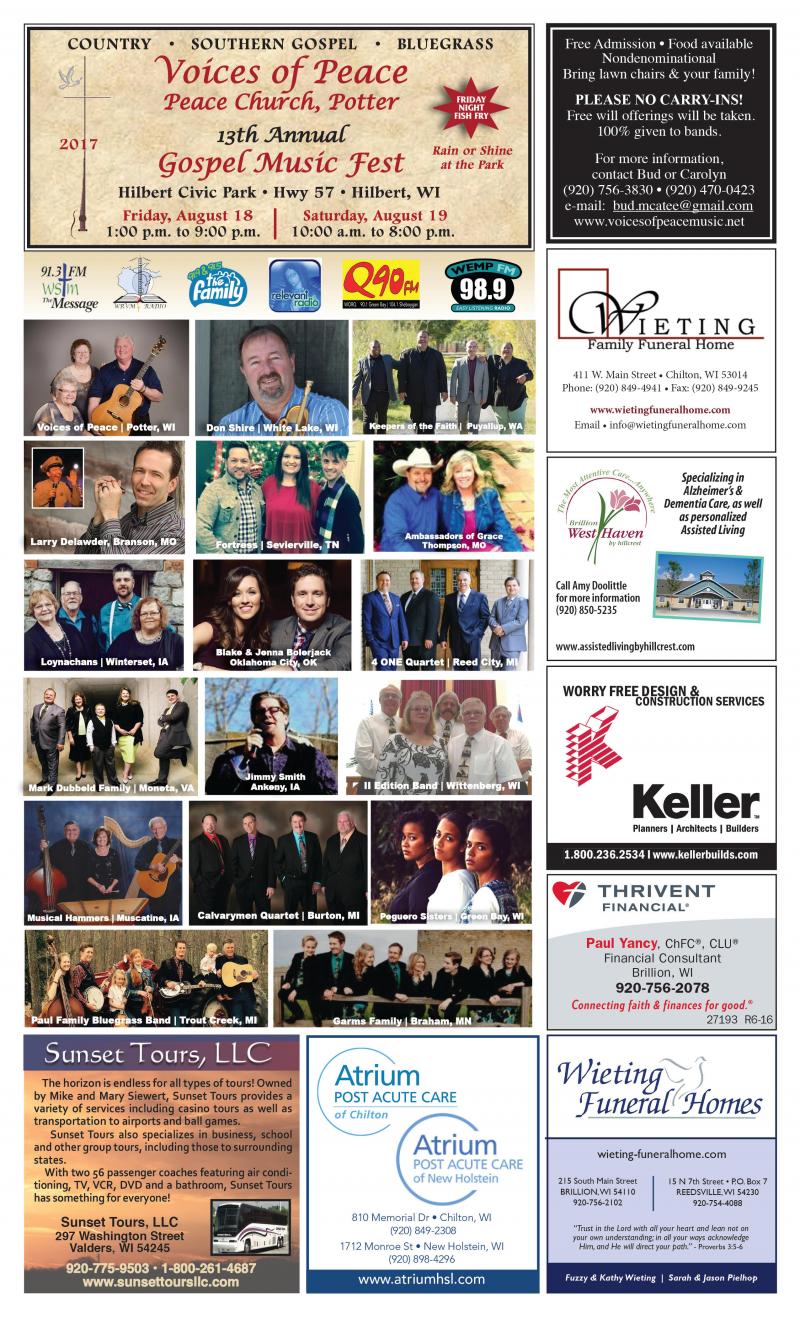 Getting to the park late in the morning and staying until early evening allowed us to catch 15 brief shows. The low degree of ego and limited space in which everything transpired meant that it was easy to run into and talk to most everyone who would be performing. Try looking for that sort of camaraderie from members of main stage headliners next you go to a major, ticketed Christianny music festival. You're likely to be disappointed.

We arrived in time to see Larry Delawder impersonating  Barney Fife before the lunch break. The Branson, MO-based entertainer more physically resembles Jack Burns' Larry Ferguson character when it comes to Andy Griffith Show supporting roles, but Dewalder emulated Don Knotts' goofy, bumbling charm well enough; more or less in character, he introduced his tween daughters, Hannah and Faith (they have their own CD!), in a track-backed performance of the balladic "Beautiful Savior," after which dad blew some mean, locomotive-mimicking harmonica on "Glory Bound Train." He showed up later in the day, still wearing his Fifery, his blonde wife playing keyboard behind him, getting his Toby Keith/Lee Greenwood on with a sincere military vets tribute song, "It's an Honor to Serve." Dewalder's angle is perfect for this sort of senior citizen-skewing shindig, and a natural fit in the family-friendly tourist trap town he calls home.

If you know anything about Southern gospel in concert nowadays, then you know that Dewalder's girls weren't the only ones singing to recorded instrumentation. It's a matter of economics and convenience for performers in the genre to not carry in tow the kind of full, live instrumentation that populates their studio recordings. No biggie, that, as it's not the only touring musical style for which that's the case.

That means, though, that the showmanship of most any Southern gospel act hinges on the singers. And let's not kid ourselves about the value of an entertainment quotient, even in this atmosphere among performers who may insist on their ministerial focus. There's advantage in keeping an audience engaged with elements beyond the music, however fine it may be.

That engagement could be in the brightly colored shirts worn by  the members of the only guys here to tout their position on the current Singing News monthly Southern gospel radio chart, Reed City, MI's, 4 One Quartet  (#78 for the peppy "I'm Gonna Get My Feet Wet").

Bounding onstage in a gangling rush and declaring your young son's  appreciation of Northeastern Wisconsin's football claim to fame, the Green Bay Packers, as the patriarch of Monta, VA, clan The Mark Dubbeld Family (say their surname as "duh-BELD") did is another way; opening with a joyously giddy ditty like "Nothing But Love In My Heart For My Brother" abets their cause as well. Telling your listeners that they might not think you're old enough to be a grandfather, as did Ankeny, IA, soloist Jimmy Smith, may border on the egotistical side of ingratiating patrons, but kudos to the dude for gamely ambling about on crutches and killing it on a smooth rendition of the oft-recorded "Everybody's Gonna Have a Wonderful Time Up There."

Smith isn't the only VoP performer to rely in good measure on remakes. Smith's fellow Iowans, The Loynachans, gave one of the more staid performances of the day, but when they're giving what they got on songs fierce as Karen Peck & New River's minor key "Revival," it's easier to forgive a lack of animation. Another Iowa bunch, The Musical Hammers Family Trio, proved that low key stage presence and subtle aesthetic attack--the lady playing hammered dulcimer to her double bassist husband and brother on folk guitar--isn't ever apt to be  accused of being wild as The Who's Keith Moon on her instrument--yields satisfaction that requires more attention. Oklahoma City's Blake & Jenna Bolerjack provided Southern gospel-with-tracks from a married perspective and, possibly, a testimony of a praying grandmother from the male half of the couple that outshone the music. The Calvarymen Quartet of Burton, MI, held down the perhaps the most traditional end of the gospel spectrum Saturday, not only because they've been around in some fashion for over 50 years, but also since they sung numbers from their current hymns album, they left room for some funny with one of Ray Stevens'  last country radio hit, "Mississippi Squirrel Revival." Pigeon Forge, TN, trio Fortress, led by hipster-quaffed 25 year-old R.J. Henderson, may best represent Southern sacred music's progressive end among 2017 VoP participants, with co-ed harmonies recalling pop country hit makers Lady Antebellum; Henderson may want to rejigger his group's moniker, though, as there looks to be a North Carolinian mixed-gender Southern gospel trio of the same name.

The closest VoP came to offering straight-up country was arguably by way of another married couple, Thompson, MO duo Dennis and Cheryl Perkins, doing business as Ambassadors of Grace. Their website bills them as Southern gospel, but hey, Dennis cuts a Paul Overstreet-like figure in his beard and 'stache and cowboy hat; and much of their repertoire sounded like a mash-up of early '80s mainstream country and Maranatha! or Integrity praise&worship material from not much later, though concluding with a Cathedrals oldie gives the stamp of their self-identified genre. Another odd duck  is among the most prolific (15 albums and counting) and well-traveled performers of the day and a Wisconsinte to boot. White Lake trumpeter/singer Don Shire plies vocalizing of a mellower stripe than fellow godly horn guy Phil Driscoll's Joe Cocker-esque wail; the other way he uses his mouth musically befits the kind of pop classical approach that must merit him spins aplenty in conservative Christian music quarters. Impressive as his track-abetted  take on J.S. Bach's "Jesu, Joy of Man's Desiring" ('70s pop aficionados may know its melody as the basis for Apollo 100's "Joy") is his ongoing missionary work in lands far flung as Ghana, India and Venezuela.

That leaves the rest of the acts we saw with live instrumentation. The breadth of my taste should easily make room for an eight-piece family band with full-on Southern gospel vocal harmonizing from accordion, dobro and fiddle, among other pieces, right? You would think, but the nigh militantly strident cheer of Braham, MN's The Garms Family's opening "Welcome to the Family" made it difficult for me to recover for whatever charms their three held. Maybe they blew the roof off the joint with their 7 PM set we missed? Regardless, the penchant for stridency manifested itself more pleasingly, at least to my ears, by way of papa David Garms' feisty, scripturally on-point between-tune preaching  and wife Kris' testifying to His comfort in trying times. I'd be happy to give them and their brood another chance, but for whatever reason, they weren't quite working for me this day.

The Garms didn't have the only squeezebox of the weekend, though. The other resides in the lineup of Wittenburg, WI's The II Edition Band (say "Second Edition Band"). Theirs is a concertina, which a classic Polish-American style polka band such as theirs ought to have alongside their trumpets, electric bass and drum kit. Though many polka bands are comprised of Catholics-hence the ongoing popularity of the polka mass in some parts of the U.S.-judging by the worship and dance schedule (savor that idea for a sec'...;how cool is that?!) on these guys' and gal's website, here's guessing they're believers of Lutheran orientation. Whatever kind of church they call home, music cheery as II Ed.'s is as natural a fit for lyrics of hope and encouragement as anything. Fitting the Our Father to the tune of late country Sonny James' "When the Snow Is on the Roses" is ingenious as Australian nun Janet Mead's '70s rock setting of the same prayer or The Blind Boys of Alabama's take on "Amazing Grace" refit to "House of the Rising Sun." Here's to wanting to see them again soon in a venue with the dance floor that their artistry demands.

Many of the musicians playing VoP likely have day jobs, but Trout Creek, MI's Paul Family Bluegrass Band sold at their booth the primary product from their main line of work: maple syrup. The tree farming couple and their yong'uns compensate for not taking their 'grass at breakneck, virtuosic velocity with quality song choices, including a couple by Appleton's nationally-noted roots songwriter Mark "Brink" Brinkman and another from fellow gospel 'grassers The Easter Brothers. Oldest bro' Austin handled most of the lead vocal duties with a classicism beyond his years, but redheaded sis' Priscilla opened with "All In The Blood" and eight year-old blondie Bethany elicited the nigh requisite "aw!"'s for her prepubescent run through "Whisper a Prayer." Another band I'd like to see in another context, the Pauls, perhaps with youngest sib' Mitchell in tow, especially if the kid can really play the mandocello he's posing with on the website for the fam's music.

Wonderful as so much of what we heard throughout the day was, it's The Perguero Sisters I especially came to see. The trio of pastor's daughters of Dominican Republic heritage first caught my ear and eye in a clip promoting an upcoming show of theirs last I was in their current home town of Green Bay, at Cup O Joy Christian Coffeehouse. By infusing remakes of Gaither Vocal Band and Martins repertoire with rhythms from their tropical roots, the Pegueros both fit into and went far beyond the largely Southern gospel basis of the festival. Their dad and a second acoustic guitarist  behind the gals often recalled bachata, the folkloric Dominican popular music so often employed to sell what's often Latin market tween pop (Aventura or Leslie Grace, anyone?), with its skittering percussive flourishes implied by the interplay of strings. The Pegueos are likewise adept at turning scripture into song, as they do to 1 Corinthians 13 on "Love," and their own "Give All We Can" has the earmarks of cCm/general market pop crossover hit waiting to happen. Would that they had a longer set, but `it was worth the trip to catch the last of their three VoP sets.

Alas, the namesake trio who founded the fest didn't play the second day of the fest. They nevertheless have my gratitude for putting together a worthwhile event that I'm going to want to fit onto my calendar for years to come.