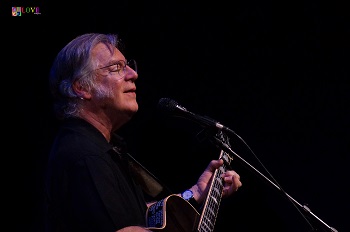 After an international commercial heyday in the 1960s, a bit of a comeback from an unexpected avenue in the '70s, and continued productivity on less of a high profile since then, John Sebastian continues to tour as a solo act into his own 70s. Though perhaps not programmed as such. the evening's show by the erstwhile Lovin' Spoonful front man was like a follow-up to the same venue's 2016 evening show with Sebastian's fellow folk rocker, Roger McGuinn of The Byrds,

Where McGuinn presented himself as a vagabond with an interest in cataloging the folk music of yore while regaling the audience with the highlights of his own career, Sebastian's approach was less formal. Even as he spoke of his adventures of a half-century ago, the impression he gave was that his successes often came by the seat of his pants, almost as if they occurred randomly.

But amid that apparent haphazardness, Sebastian and his band mates proffered some of the hippie era's more memorable pop hits. In a friendly, intimate manner, with a voice a bit gruffer with age, he shared those songs and the stories of stories of how they came to be written, often with self-deprecating humor.

For a bunch of mid-'60s Greenwich Village  folk enthusiasts, the Spoonful were especially open to influence from highly commercial music. And there was arguably no more commercial music being made at the time of the band's rise than that being released by Motown Records; the label's founder, Berry Gordon, Jr., had chutzpah enough to say that he was producing "the sound of young America," with the sales and radio play to back his claim. Sebastian this night claimed inspiration from at least two Motown acts; their first single, "Do You Believe In Magic," had its basis in the melody of Martha Reeves & The Vandellas' "Heatwave," while "Daydream," of which he forgot to sing its second verse, though he urged the audience to whistle along to the part of the song that called for it, "wouldn't have been written without The Diana Ross & The Supremes' "Where Did Our Love Go?"

Even if the latter Lovin' hit doesn't quite fulfill the directive of Sebastian's band mate Zal Yanovsky to make music for kids to dance to, that song and the group's output overall succeeded at avoiding the humorlessly doctrinaire dourness of the Village denizens he deemed "folk Nazis." Those smug souls for whom the early '50s American Anthology of Folk Music box LP box set was a kind of audio Scripture may have arguably been justified in their dismissal of the nigh incessant cheer and matching outfits of The Kingston Trio and The Rooftop Singers for their questionable folkie authenticity but were doubtless not much fun at parties.

Sebastian, conversely, was transparent about situations that embarrassed him at the time but find him wistfully amused now. The Spoonful playing as the background band for a stripper named Topless Maria while "Magic" was climbing the charts and sleepily sharing a tour bus seat with Ross and drooling on the diva in his slumber (and being fondly called out for it by her at an awards ceremony decades later) were among the recollections Sebastian shared as ways of humanizing his celebrity. Though he didn't go on much about the genesis of his lyrics, he told of the experience of seeing a seemingly anonymous guitarist who could play circles around the Spoonfullers do his thing in a public space down South that resulted in the witty "Nashville Cats."

A similar kind of humility, or at least identification, came to Sebastian when he was pitched to write what became his only real solo biggie. The television producer who propositioned him to write a theme song for the situation comedy Welcome Back Kotter was surprised to hear that the singer-songwriter was able to come up with "Welcome Back" only a day after their meeting. Sebastian said the song so quickly coming together can be attributed to his virtually having been one of the Sweathogs, the gang of friends depicted in Kotter's high school setting. Cue the audience to sing along to the most successful TV-related single of the '70s... Not at all the same kind of hit but displaying rootsy style at least as well, he also played a bit of a song he wrote for one of the cartoons that kept him employed in later years, an animated iteration of the Care Bears. Hey, if Randy Newman is going to keep occupied by all those Pixar flicks, Sebastian's a fine go-to guy for 'toon tunes.

The rambling, anecdotal nature of Sebastian's time on stage occasioned some odd omissions, though. He never got around to The Lovin' Spoonful's highest-charting and fiercest  45, "Summer in the City." And though he's also renowned as a second-generation harmonica player, it was a bit disappointing to hear him only play a bit of the instrument he and his father have in common, and even then, only in rack mode. That said, he's more dexterous than most-including Bob Dylan-in manipulating the mouth harp with that contraption around his neck.

But address the opening question, Sebastian and McGuinn are among a literally dying breed. If the Waupun Festivals committee wants to keep up the run of bringing in solo acoustic shows by U.S folk rockers from the hippie era, perhaps Michelle Phillips of The Mamas and Papas could fit a run through Wisconsin into her 2018 schedule? In any case, shows such as these are great for aging rockers to keep busy making money to supplement their royalty checks (provided bad business deals didn't shortchange them of that income) while audiences in smaller locales where they didn't play back in the day have the opportunity to hear of pop culture history from those lived and created it.

May Waupun Festivals continue to bring in such worthwhile talent, and may Sebastian know the One who gifted him so richly with a musical gift that continues to resonate.