This was one of those gigs that you catch at just the right time and place.

As the trans-Atlantic partnership of Bragg and Henry played the show, polls were beginning to close in the US presidential elections, and the setting of Union Chapel – a working church – only highlighted the spiritual references sprinkled liberally throughout the evening’s show.

It was only minutes in when the pair prepared us for what was at the front of their minds. American Joe Henry was apologetic about America teetering “over the abyss.” Bragg noted that, after Brexit, the UK was already falling down it. He told the old joke about a man who had thrown himself off a ten-storey building. As he was falling past the fifth floor, people inside asked how it was going. “Alright so far,” he replied.

Topping and tailing the gig were tracks from their current joint album Shine a Light, a set of classic songs about the railroad. Both players insisted that they had curated the songs, not to look back, but to get inside the songs and keep up the tradition. “We want to Make Americana Great Again!” was their rueful comment.

The American railroad songs capture a sense of wanting to escape, something that implies travelling a long distance to get away from their imprisoned state – and with several songs, that imprisonment was literal. The title track refers to a myth inside one jail, that if the midnight train, sweeping around a nearby curve in the track, shone its light on you as it passed, you were next up for parole.

Often there was a sense of loss in what history has done to the towns that sprang up around a now defunct railroad. Second song in was Jean Richie’s poignant ‘The L& N Don’t Stop Here Anymore,’ about the Louisville & Nashville Railroad’s passenger train that closed along with Kentucky’s Cumberland Mountains mining industry. It aches with the loss.

Such harm for the ordinary person is foundational for Bragg’s songwriting and the pair’s commentary on the songs brought them well into the present. The work of Leadbelly and Woody Guthrie was key to the material and, introducing final song ‘Ramblin’ ‘Round.’ Bragg described the time when Guthrie was living as a hobo and trying to get into California. Roads were blocked off to anyone without work and, giving the lie to the romantic idea of the hobo’s life, they could be hit with clubs to keep them out of the state.

“My mother prayed that I would be a man of some renown,
But I’m just a railroad bum as I go a ramblin’ ’round.”

Bragg changes “railroad bum” to “refugee” to show how life in France's Calais jungle is not too different to a hobo’s experience many years earlier.

Two short solo sets framed the interval. Henry’s highlight was at the piano – the only time it was used all evening – playing th eemotional ‘Our Song,’ which was so prescient on the eve of the poll results.

“This was my country, this was my song
Somewhere in the middle there, though it started badly and it’s ending wrong.

This was God’s country, this frightful and this angry land
But if it’s his will the worst of it might still somehow make me a better man.”

This was one of the spiritual callouts dotted throughout that made Union Chapel such a fitting venue (and one with excellent sightlines and a perfectly clear sound). The pair were standing in front of the building’s large pulpit and Bragg’s words overlapped enormously with the Christian call to serve the dispossessed and fight for justice.

In his solo set, he said that there was one word needed, above all other words. I should have remembered, having heard him before, but wondered what it would be. Compassion? Hope? Grace? No, it was “solidarity,” and led into ‘There is Power in a Union,’ which felt a little retro and somewhat out of place.

‘Accident Waiting to Happen,’ however, was a very welcome inclusion, and even more so was his cover of Anais Mitchell’s powerful ‘Why We Build the Wall’ – an apposite protest against the politics of fear.

The encore did what we hoped, and included a couple of songs that could have made it onto the album, had they revealed themselves a little earlier.

The duo return to Union Chapel next year – although that venue is already sold out –  and I wonder how the set list will evolve by then. As for this night, it was the right place at the right time, and all the more powerful for it. 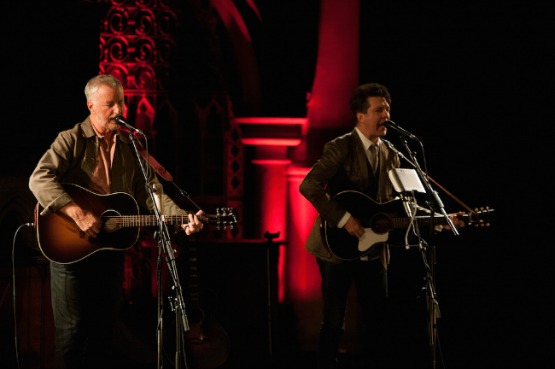 Joe Henry:
Trampoline
After The War
Lead Me On
Our Song
Freedom for the Stallion

Billy Bragg:
No One Knows Nothing Anymore
King James Version
Accident Waiting to Happen
Why We Build the Wall
There Is Power in a Union

Encore:
Gentle on My Mind
Tonight I’ll Be Staying Here With You
Ramblin’ ‘Round