MuteMath at the Mercury Lounge - NYC

It makes perfect sense for the force of nature known as MuteMath to upstage two natural disasters by showing up in New York and throwing a party.

So here we are in New York City's funky Lower East Side at the Mercury Lounge, two days after an earthquake and two days before a hurricane. 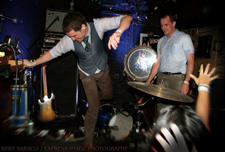 It makes perfect sense for the force of nature known as MuteMath to upstage these two natural disasters by showing up and throwing a party.

People lined up hours early at the intimate (okay, small) venue. The casual eavesdropper could pick up the usual on-line-waiting-for-the-doors-to-open conversations: 'yeah – I've seen them eight times,' 'the new guitarist is supposed to be good,' 'I caught one of Darren's drumsticks in Philadelphia,' and the most popular one of the night: 'I was at Bamboozle and I had no idea who these guys were, but now I'm hooked.' MuteMath has always had a way of instantly mesmerizing audiences with their unique sound - a hybrid of electronics, pop, soul and jazz - and their uninhibited, energetic, explosive stage antics. If these jaded New Yorkers were waiting for the after-shock to Tuesday's earthquake, they'd find it inside The Mercury Lounge in a little while....

Once inside, the crowd instinctively surged forward, creating one pulsating, breathing mass of humanity. Even the opening act seemed to have been impressed by MuteMath's sound-check, and made their exit after a mercifully efficient set so that the stage could be prepared for headliners. Everybody knew that the band would be premiering new music from their forthcoming project, Odd Soul (which will release during the first week of October and can be pre-ordered now ), and that there would be one new member onstage - multi-instrumentalist and vocalist Todd Gummermann, who will be filling the musical space formerly occupied by founding member Greg Hill, who is no longer with the band. Obviously, excitement was in the air at this venue that had sold out weeks before in a one-minute flurry of on-line ticket buying.

The between-set activity on stage was our only entertainment between sets as we watched various equipment broken down and Mutemath's array of drums, guitars, keyboards and synths being moved into the positions so familiar to the faithful. There was one big surprise – the mighty Hammond B3, that had been looming ominously in the darkness, was brought center-stage followed by Paul Meany's familiar Fender Rhodes. Meany would play between the two keyboards (the Hammond had a mini-moog mounted on top), which faced each other and were perpendicular to the audience. As we stared up at the new addition to the band's arsenal, a noise came from the back of the room - almost like a snare drum plying a marching rhythm, accompanied by a tambourine ...maybe something you might hear out of Bourbon Street. I guess this mini-parade was the most sensible way for Darren King, Paul Meany, Roy Mitchell-Cardenas and Todd Gummerman to get through the crowd and onto the stage......! 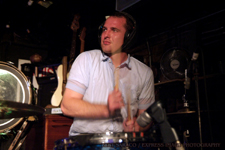 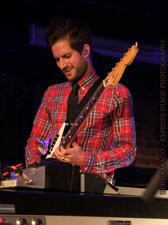 After the surprising entrance, it was straight-ahead, high energy MuteMath – starting off with "Prytania," "Heads Up," and "Allies," from Odd Soul, the band gave us the hoped-for "Reset" to gain our footing, then it was back into the new material. The new album's title-track was followed by "One More," "In No Time," and the heavy blues rocker, "Blood Pressure." The new songs crackle with energy (as did the Hammond's keyboard, which kept giving Meany electric shocks through the show) and come across with more edge and less introspection than Armistice. The new texture provided by the Hammond brings a more classically bluesy/jazzy feeling and even sounded a bit 'churchy' on a couple of interludes – if you go to church in the South... 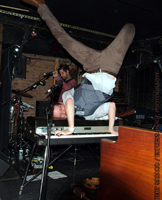 Meany's vocals were powerful and tasty, and he straddled the two keyboards nicely, perhaps enjoying the Hammond's possibilities a bit more than the Rhodes for now – and, yes, he still throws his body all over the keyboards (even with such dangerously low ceilings)! Roy's bass sounds more aggressive on the new songs, but still with his taste and skill much in evidence – obviously a player's player, Roy looks like he's having a great time laying down the bottom end, singing back-up, and adding occasional percussion. Darren is, as always, a marvel to watch and listen to as he creates stunning drum patterns with power and precision – one would almost call him reckless (and he doesn't always walk away unscathed) but he certainly gets the job done – the man is always astounding. Todd, like Greg before him, is busy onstage, playing guitar, singing, and filling in keyboard parts. The crowd obviously approved... 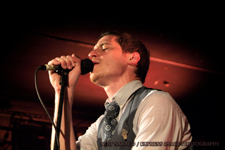 "Spotlight" had the crowd singing the leading riff and clapping to the beat and "You are Mine" followed, providing a nice contrast and a needed mood-shift leading up to the night's last few songs. "Chaos" and "Break the Same" brought the crowd to a frenzy, followed by the fascinating mini-opus, "Quarantine," which I'm sure will be a highlight on the new album – a mostly instrumental piece with some interesting vocal effects by Paul.

There are very few bands out there that can interact with an audience the way MuteMath can, and if this 'introductory tour' is a hint of things to come – look out. Watch for these odd souls to come to your area, and don't miss them!