Steve Taylor and the Danielson Foil 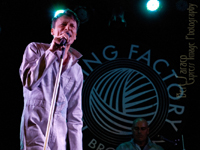 Foiled again ...and loving it!

It was the first of what was to be several bone-chilling nights in New York - which is better than the deep snow and blizzard-like conditions that cancelled the first two stops of Steve Taylor and The Danielson Foil's inaugural tour. The arctic trek from Midtown Manhattan to trendy Williamsburg, Brooklyn was, as expected, an adventure. At least on this night - after the hunting expedition that we call parking in New York - we'd get to be part of the first audience to see Steve and his band of merry men (and one woman - more on that later) performing the entirety of Wow To The Deadness (the new EP), Goliath, and special treats from the back catalog of Taylor and Danielson.

For those of you who are saying, 'what exactly is a Danielson Foil,' the answer lies in last year's tour supporting Goliath, the initial release by Steve Taylor's new band, The Perfect Foil. In an inspired bit of booking, the opening act for the tour was Dan Smith, aka Danielson, aka, Danielson Famyle, aka, Danielson and The Nine Fruit Tree. You see, sometimes Dan Smith dresses like a fruit tree on stage - not that there's anything wrong with that ....as a matter of fact, there's so much that's right about it that before long Smith was collaborating with: the aforementioned Steve Taylor; bass player, singer, and all-around musical wunderkind, John Mark Painter; drummer, singer and former newsboy Peter Furler; and painter, photographer, singer, and guitar player Jimmy Abegg. The result was Wow To The Deadness, an amazing, energy-filled raucous quarter-hour (give or take 15 seconds) of quirky rock and roll that pretty much took everyone by surprise, including world-renowned producer, Steve Albini. And that, boys and girls, is how the Perfect Foil became The Danielson Foil.

Cut to: The Knitting Factory - Brooklyn, NY... Turning off Havemeyer Street (shades of Jackie Gleason and The Honeymooners!) the venue comes pretty quickly into view. Nestled amidst eateries (most notably an old-school, family-owned pizzeria) The Knitting Factory welcomes you with a bar to the right and the concert entrance to the left. As we head to a pair of closed doors it's obvious that a sound-check is in progress, and a few seconds of listening reveals that Steve Taylor and The Danielson Foil are indeed on stage. We walk in under disguise as 'the girl and the old guy with the camera,' and are very impressed at how tight the band sounds and how powerfully the music is coming across, despite the crushing blow to my ego about the ‘old guy’ remark. Everything’s relative…

The amazing thing is that all of the necessary sound comes out of such a basic four-piece set-up of drums, bass, electric and acoustic guitar. Taylor plays nothing on stage but uses his evocative, unique voice to sing, speak-sing, chant-sing, and shout-sing the lyrics. His lanky frame is a whirling dervish, sometimes suggesting a manic puppet breaking free of its strings. Smith is in the second-vocalist spot, his unique, almost child-like voice adding a new texture to Steve’s songs, and stamping the Danielson Family sound firmly on his featured numbers. All of the other band members have mikes ready, as they sing harmony and back-up when called for.

John Mark Painter’s bass is a growling animal, winding under the music and supporting it at the same time. His notes sound thick enough to lay down on and articulate enough to tell you a good story. Peter Furler’s rock-steady drumming is not as simple as it sounds at first. His timing is impeccable and the sometimes staccato breaks that The Foil’s music – and certainly Dan Smith’s music - call for require a player that approaches the kit with his brains as much as his gut-level funk, and Furler brings it all to the table. Daniel Smith, with his ever-present music stand in front of him – invests all of his emotion into playing and singing, eyes squeezed shut, mouth wide open, working hard and giving it everything he’s got. Bookending the stage opposite Painter is Jimmy Abegg, wielding the guitar with the command that only decades of experience can give, pulling sounds out of the instrument that seem inherently possessed by the spirit of the classic rock era but energized and infused with the fire of the moment.

The opening act, The Welcome Wagon (on Asthmatic Kitty Records), did a short set of acoustic folk songs with that subtle Sufjan Stevens vibe that sets the label’s artists just a bit off-center. Husband and wife Thomas and Monique Aiuto stand face to face in profile on-stage singing songs about life, faith and such, often incorporating scripture. The guitar, upright bass and small pump organ provided an enjoyable but distinctly low-key vibe before the explosion that was to follow.

It’s time for the main event and Dan Smith steps onto the stage and mesmerizes the (partially) unsuspecting crowd with a solo acoustic performance of “Southern Paws,” after which he’s joined by his wife, Elin, who offers a vocal assist on “Body English.” Elin is dressed in the standard Danielson Family ‘uniform,’ combining aspects of 1940’s USO performer and a mail carrier. Dan is dressed in the silver jump suits that would be the uniform of the night for the rest of the band. “Grow Up” is next, as the rest of The Foil join in. By the time Steve steps onto the stage, Elin is gone and we’re faced with Steve Taylor and The Danielson Foil. Let the games begin….

We’re promised right off the bat that we’d be hearing the entirety of Wow To The Deadness, the band’s fine EP, and that it should take at least a good twenty minutes. Actually, the promise was kept (but it took longer than twenty minutes, of course) with plenty of other musical goodies from Steve’s considerable back catalog thrown in beside. The band reached all the way back to the title track of Taylor’s landmark I Want To Be A Clone (also a six-song EP) and worked their way through the years up to last year’s unveiling of Goliath. Along the way, old favorites such as “Am I In Synch,” and “Cash Cow” proved that a more basic rock environment couldn’t dampen the crowd’s reaction or render the songs less powerful than they were originally. The early Taylor material, like Daniel Smith’s songs, gained a new, raw energy in the context of a stripped down rock format.

Of course, after the group’s departure from the stage, an encore was demanded and delivered. The aforementioned “Cash Cow” was followed by the re-emergence of Elin and a rousing version of Danielson Family’s “Did I Step On Your Trumpet,” the powerful “Finish Line,” and the poignant “Hero.”

Thanks to a pair of northeast snow storms we got to see the first performance of this new version of this still-new band, and they more than exceeded expectations. You know what they say (to quote the song, “Comedian”) - “Man makes plans – God laughs.”

To see a complete gallery of pictures from this and other concerts, go to: