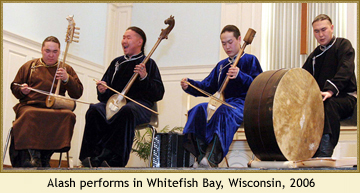 To most Westerners' understanding, it may not seem like much of a life to nomadically move your housing from mountains to lowlands through the course of a year in order to avoid the extremes of temperature to which your homeland is subject.

But the people of the small Asian nation of Tuva have kept much of the 21st century's technological tyranny at bay in order maintain a mostly roving, largely agrarian society. One of the such a society's byproducts is a vocal music with an unusually heightened sensitivity to the sounds of nature. Tuvan trio Alash brought their land's mastery of human voice for a fourth time over several years to a nearly sold out back room of Woodland Patterns bookshop Wednesday night.

The simultaneously multiple-octave throat singing of Tuva has become something of a fascination for some in world music circles since the release of the 1999 release of Ghengis Blues, a documentary about an American singer who pursued excelling in the style and travel to its nation of origin. Even with a couple decades or so of somewhat broader familiarity in the U.S., it can still be something of a thing of awe to witness the this sort of vocalizing live. Especially when it's delivered by a trio of singers such as Alash.

Though throat singing can conjure mental pictures of everything from birds and foghorns to bagpipes and the ground-breaking synthesizer work of Gershon Kingsley and Sun Ra (the latter's band has collaborated wth Alash), the subject matter of Alash's songs isn't all that exotic. With songs about cattle, horses, haystacks and cuckoo birds, it's fair to say that many of Alash's lyrical concerns are more rurally minded than those of much current  commercial radio country music in the U.S. Sean Quirk, the affable former Milwaukean who serves as Alash's manager and interpreter, pointed out most of the lyrics' references, but Ayan-ool Sam, the only member of the group who spoke English to the audience, also pointed out that at least a couple of the ensemble's 13 songs that night are about that old standby of songwriting the world over, women.

Most of the instruments the threesome played may look different than most that would accompany pop or folk music in the States, too;their sounds, however, comport significantly with American vernacular music. Though made with instruments having much longer necks than most used in U.S, music,,. their combined effect doesn't differ much from that of old time, pre-bluegrass string music. Exceptions to  that sort of sonic commonality would be Sam's use of a couple of percussion instruments, one of which is a pair of hollowed out horse hooves filled with bells, and Bady-Dorzhu Ondar playing a Russian accordion on one piece.

Throat singing is such an integral and esteemed part of Tuvan culture that the nation's equivalents to Congressional Medals of Freedom and Grammys are bestowed upon citizens who excel at it. All three of Alash's members have received such honors. Though they likely didn't score that sort of hardware for their latest Milwaukee performance, the pair of standing ovations they received must have been some gratifying compensation.