The weather was unusually mild for a December night in New York City but the prospects for what would be taking place in the hallowed halls of fabled Carnegie Hall were nothing less than red hot! Backed by a 140 voice mass choir and underpinned by a tight let’s-have-church ensemble led by musical director Ray Chew and augmented by New York’s legendary Chops Horns, two giants of contemporary Gospel music – Donnie McClurkin and Kim Burrell – brought some spiritual fire to the venerable stage. 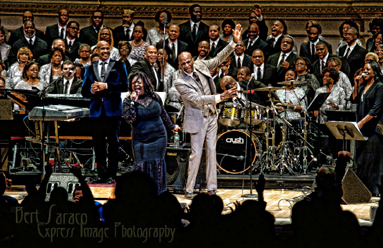 Chew’s core band consisted of familiar church instruments – a piano, Hammond organ, guitar, bass and drums – augmented by a synthesizer and the aforementioned horn section. The cavernous stage of the hall isn’t friendly to drums and electric amps, so subtleties might have slipped into the atmosphere - but the raw power of the gospel is less about nuance and more about power, emotion, and spirit, and all three were well in attendance. 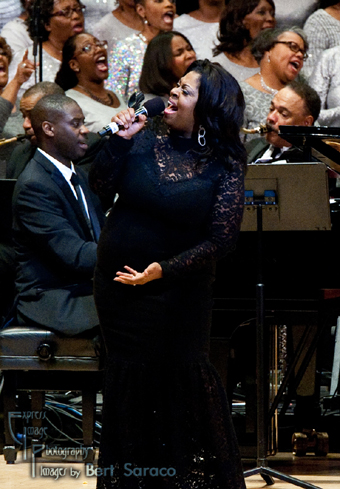 Mighty High,” a song made most famous by The Mighty Clouds of Joy, but it was Chew’s introduction of Kim Burrell that really sent the shows momentum into high gear. Burrell, a powerhouse singer with not only great gospel chops but some jazzy Ella Fitzgerald-like tones, went right into a solid version of “Walking Up The King’s Highway,” an up-tempo gospel standard. “What The World Needs Now Is Love” followed, with the singer adding a dose of soul not normally heard in the Bacharach / David standard.

Kim Burrell amazed us with her vocal prowess, but Donnie McClurkin seemed to electrify the audience simply by walking out onto the stage. The tall, ever-cool looking McClurkin (who acknowledged the compliment to his wardrobe that was called out from an enthusiastic audience member) launched into “Faithful is Our God,” the first taste of truly contemporary 'church gospel' of the night. Turning to the choir, McClurkin broke down the Soprano, Alto, Tenor, and bass parts as the audience seemed to understand that this concert had just become church. 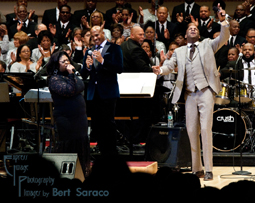 Noting that, in Carnegie Hall it's said that you don't need a microphone, McClurkin abandoned the one he was holding and sang Amazing Grace with no amplification except what God gave him, and the moment was memorable, indeed.

If ever there was an emotional one-two punch it was Donnie McClurkin performing "Stand" back-to-back with "We Fall Down" - two of the most powerful gospel songs of the past few decades and defining songs for this artist. Observant audience members would be able to see that even some of the seasoned musicians were visibly affected 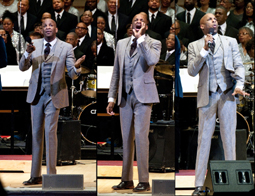 by the "you can get back up again" refrain, which grew in intensity until the song ended with a sustained standing ovation from the crowd. What could follow this other than the re-emergence of Burrell to join Donnie in a rousing, powerful "I Call You Faithful," a suitable lead-in to the announcement of a brief intermission, allowing - if nothing else -people to recover from what had just happened on stage...
Part two of the evening opened with the theatrical moves and entertaining vocalese of Vy Higginsen and the Gospel For Teens Choir, whose energetic and expressive presentation captivated all in attendance. 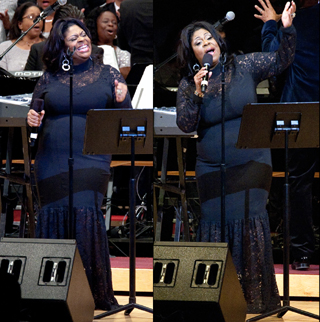 Kim Burrell once again took to the stage for two ageless standards: "How I Got Over" and "The Old Landmark." Both songs were covered by Aretha Franklin in her classic live Amazing Grace album and Chew basically stayed faithful to those arrangements for the band and choir - of course, Burrell added her own special vocal style to make the songs her own for the night. As the applause faded, McClurkin once again walked out and joined Kim to make sure everyone was 'ready to get their praise on,' while the music got about as funky as gospel can get, eventually ending with a spirited vamp of Sly Stone's "Thank You (Falettinme Be Mice Elf)" (Stone's way of saying 'thank you for letting me be myself,' for those of you who never saw the song title as it was written)!
Calming things down, Ray Chew announced an unexpected guest in the house that wanted to be a part of the evening and introduced Cissy Houston, who walked to center stage surrounded by her home-church choir, sat in a chair, and sang a moving rendition of "Oh, Holy Night." Frail in body but strong in spirit, Houston received much love and respect from everyone in the historic auditorium.

Ending the evening with the first true 'sing-along' of the night, Ray Chew lead the 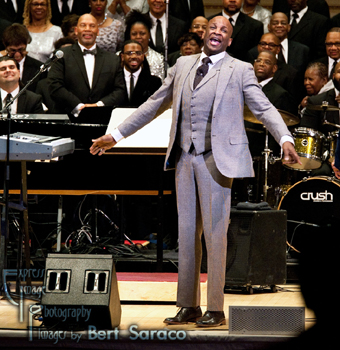 standing audience members in Ashford and Simpson's "Reach Out And Touch Somebody's Hand," advice that the racially diverse crowd took to heart, proving that - even in difficult days like we're in today - a simple act can become a unifying experience. 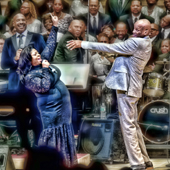 As a musical post-script, Ray Chew, the band, the choir, and most of the audience took part in one of the most recognized of all contemporary gospel songs - Edwin Hawkin's groundbreaking cross-over hit, "Oh Happy Day." It certainly was a good way to end a very happy night.