The palpable energy and visceral gestalt of a MuteMath concert makes the experience an almost addictive pleasure, a cathartic musical therapy to - at least temporarily - break the spell of the typical.

well-deserved reputation for delivering live performances as hot as Emeril Lagasse's spice rack. MuteMath recently performed Back-to-back shows at The Mercury Lounge, in New York City's Lower East Side, and Baby's All Right, in hipster-friendly Williamsburg, Brooklyn. Each venue sold out in less than a half-hour as soon as the tickets became available. The intimate venues were packed wall-to-wall with rabid MuteMath fans old and new, many having formed lines hours before the doors opened, in hopes of getting as close to the stage as possible (the show at The Mercury Lounge started at ten o'clock but the first people on line were there well before six). 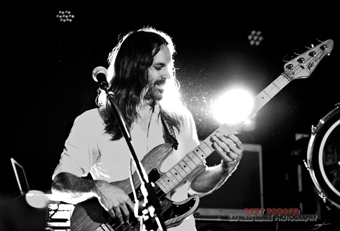 At shows like this, fans surge the room as soon as the doors open, hoping to feel the edge of the stage cutting into their upper thighs - and if all goes well, before the night is over, many in that frontal-assault will be able to say that they did indeed feel drops of front-man Paul Meany's perspiration hitting them as the charismatic singer/keyboard player worked the very edge of the stage, danced, and, yes - did headstands on the piano...

You might be tempted to ask, 'well, is it about the music, the performance, or the party?' The right answer would be 'all of the above.' The captivating, impossible to pigeon-hole, genre-defying music that has set MuteMath apart - from the release of their independently-marketed (and eventually picked up by Warner Brothers) debut EP, Reset, to their soon to be released fifth studio project, Vitals - is unquestionably what's brought everyone to the dance. Still, the manic performances, the pure charisma (especially that of the aforementioned Meany and explosively passionate drummer, Darren King), the palpable energy and visceral gestalt of a MuteMath concert makes the experience an almost addictive pleasure, a cathartic musical therapy to - at least temporarily - break the spell of the typical. It has to be all of that to bring people out like this on a Wednesday and Thursday night - and make no mistake: once was not enough for most attenders (including this one), who showed up for both nights. 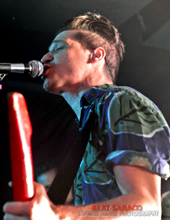 The current tour is introducing new music from the forthcoming Vitals to the faithful that are packing these intimate venues. Word has already spread that the often two-and-a-half hour shows also incorporate music from all the way back to the first EP, many songs that have seldom made their way onto set-lists in recent years - and the excitement level is palpable ("Plan B"?! “Without It”? No way!)

Older songs have revised endings and subtle surprises in the arrangements (partially due to the 'newest' member of the band, multi-instrumentalist Todd Gummerman, who replaced Greg Hill). Roy Mitchell-Cardenas, whose bass playing has become legendary, now spends much of his stage time playing guitar, freeing Gummerman to switch from guitar
(on most of the early repertoire) to work at another synth keyboard, conjuring up musical textures and adding vocal harmonies to Meany's singing. 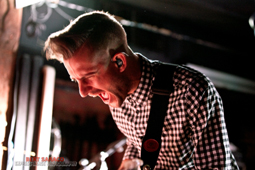 The bass seems to be coming from multiple sources at different times. Everyone is multitasking: Roy turns to his right to add more synth, to his left to play percussion, Darren plays locomotive patterns, now adding roto-toms and a pad that triggers electronic beats, Paul is a whirling dervish surrounded by keyboards, effects-boxes, percussion, and - of course - the microphone and stand, which he wields with the dangerous skills of a singing ninja.

The well-loved DJ known as The Quiet Entertainer has been opening most shows on the current tour. The audience responds enthusiastically to his combined charm and skills, knowing that the DJ is as much of a MuteMath fan as they are. Great choice as an opener! Lights out, people crazy. MuteMath takes to the stage like mysterious figures coming out of the Louisiana bayou under the shroud of a night fog (Baby's All Right actually did provide the swampy fog via a smoke machine - much to the dismay of photographers in the crowd). The building energy of the atmospheric, somewhat ominous instrumental "Collapse," explodes into the high energy "Typical," which gives way to the all-out rock and funk of "Prytania," amidst back-lit strobes, pure-white floods rendering the band in silhouette and general crowd madness.
And so it begins... 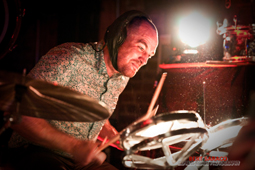 The stages seem impossibly small to contain this much energy. Still, within minutes, the physics of what's taking place vanish and all that's left is the connection of MuteMath and the audience. Left to right is Todd Gummerman, quietly doing yeoman’s work and only rarely stepping into the spotlight, then it's Paul Meany, as much away from the keyboard as he is behind it, sometimes dancing while he plays, grabbing the iconic Keytar and seemingly connecting with every face in the crowd. Roy Mitchell-Cardenas is next, slipping from bass to lead guitar, making adjustments, tweaking his sound, looking serious about having fun and making this music - a study in creative, but controlled energy. 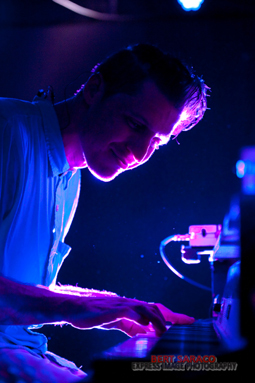 Anchoring the end of the stage is Darren King, playing impossible drum parts, looking like half the time he's about to leap over the kit, eyes often closed, primal yet incredibly modern in his approach. The four men work hard creating a viscerally stimulating performance of what's a uniquely contrasting mix of music for the soul, spirit, head and body.

The new songs carry a more positive vibe than some of the band's back-catalog. The faster songs are ready-made dance mixes - intelligently crafted pop songs with irresistible hooks that will stay in your head hours after you've gone home. The slower songs are hypnotically beautiful washes of sound hovered over by Meany's ethereal voice singing often-poetic lines. A quantum conceptual leap from the earthiness of Odd Soul and the existential soul-searching of Armistice, these new songs are life-affirming, hopeful and just plain fun. It seems almost as if these four guys have had their dark night of the soul, have survived, and are ready to celebrate. And, trust me - they are ready to tear the house down - don't miss them.

The Mercury Lounge – September 23, 2015
VITALS
BLOOD PRESSURE
SPOTLIGHT
WITHOUT IT
STARE AT THE SUN
OBSOLETE
PRYTANIAUSED TO
JOY RIDES
LIGHT UP
MONUMENT
CLIPPING
CONTROL
STALL OUT
NOTICED
TYPICAL
BURDEN
RESETBREAK THE SAME
QUARANTINE
ALSO PERFORMED:
CHAOS, ELECTIFY, YOU ARE MINE 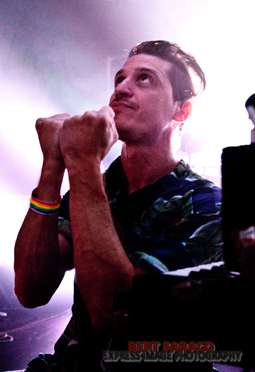