Through the sheer force of his compositions and musical dexterity, Cockburn produced a mix of vocal and instrumental performances that touched the heart, reached the soul, and stimulated the mind...

With more than a 'couple dozen studio projects under his belt, not to mention live 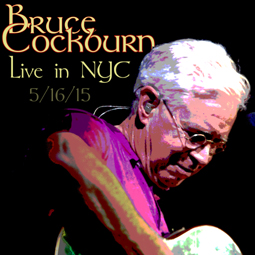 recordings and now, a book, you'd think that Bruce Cockburn would be ready to cut his touring schedule. Thankfully, that's not the case. The Canadian troubadour still takes to the road with his words and music – this particular night at The City Winery in New York City. Cockburn seemed right at home on the modest but well-lit stage, singing about 'all the diamonds in this world' while wine was fermenting in barrels in the venue's lower levels. Looking out at the crowd seated at tables, I wonder if he could see the diamonds formed by the street-lit rain against the windows. If so, I'm sure the symbolism wasn't lost on him – he tends toward the poetic...

The fact that Cockburn is at once a poet, a revolutionary, a mystic, a believer, a cynic, and (naturally) an artist, is what we love about him and why we were all there on a steamy, stormy New York evening. Any artist that could create both "Lord of The Starfields" and "Rocket Launcher" (neither performed at this concert) has the potential to both outrage and delight his audience – something he's been doing since the 70s.

These days Cockburn is looking like a cross between Rick (SCTV) Moranis' rock star parody, Clay Collins and conservative radio host, Dennis Prager – neither persona fitting the singer's sensibilities exactly... but Bruce looks fit, healthy, and satisfied with where life has brought him. Not exactly a kinder, gentler Cockburn, but certainly a more contented one. The passion is still there, and is obvious from the moment when he picks up one of the five guitars behind him and starts off the night with "Bohemian 3-Step," an instrumental from the Small Source of Comfort project. The eyes are closed, the playing is intricate, nuanced, and captivating. For the first of many times on this night we're transported to another place... 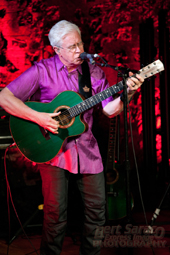 vocals – and Cockburn delivers it perfectly, sounding vocally strong as he confesses to being "good at catching rainbows," but, "not so good at catching trout." Later in the song he explains further: "I'm good at blowing holes in things, and ranting in self-doubt / got a way with time and space, but numbers freak me out." If this performance is meant to be confessional, this is a good start. Of course, the same is true if the night is meant to be sarcastic and humorous. No doubt the right answer is all of the above. 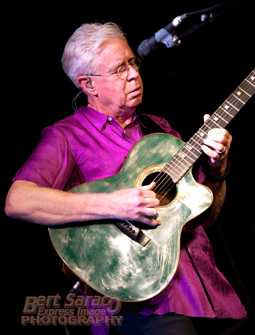 "Lovers In a Dangerous Time" hits at just past the half-way mark of the first set. The first half closes with "All The Diamonds in the World." Bruce is alone on stage but he's brought sounds. Waves and wind sounds seem to swirl through the venue while Cockburn plays guitar, at times accompanying himself by creating loops of repeating passages and activating hanging tubular bells via foot pedal. Vortexes of sound...

Part two opens with Cockburn slinging a national steel guitar, delivering a bluesy cover of Blind Willie Johnson's "Soul of a Man."
"Rumors of Glory" brings us back to the artist's classic catalog and starts the path all the way to the inevitable encore, "Wonderin' Where The Lions Are" (which was preceded by the audience singing "Happy Birthday" to

With minimal patter (but an admission that the crowd of New Yorkers weren't living up to their nasty rep), Cockburn won the evening through the sheer force of his compositions and musical dexterity.Bruce).

The unassuming man on stage produced a satisfying musical mix of vocal and instrumental performances that touched the heart, reached the soul, and stimulated the mind. The light refracting off the raindrops was just a bonus. 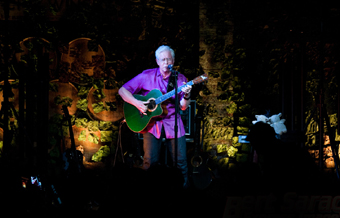