In stark contrast to the majestic bigness of the brass, Groves brought out the frail humanness of our condition with her emotionally-honest performance 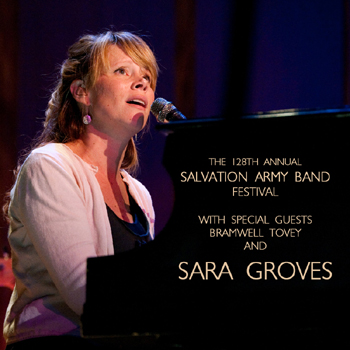 community, the Joni Mitchell of CCM, the poet/champion of young Christian couples raising families, etc., etc. Certainly she's all of this and more – although she'd probably think that last statement to be an exaggeration. On a Sunday evening in April I'd finally get my chance to see Sara Groves in concert, hosted by the impressive NYC Centennial Memorial Temple. Aside from a geographical miss-cue or two, my wife and I eventually found our way through the labyrinthine halls of the impressive midtown structure to arrive in a hallway where, to one side, was the open stage door where the Salvation Army Staff Band was doing a sound-check. The small door to our right opened and we were welcomed into a comfortable room with some refreshments and, yes – Troy and Sara Groves, along with bass player Aaron Fabbrini.

The entourage was as welcoming and unassuming as we could have hoped for (it's always great when people you view as amazing artists prove themselves to be genuinely nice people). Troy is the more 'managerial' of the two, frequently dealing with a phone call or two, looking serious about the business of doing it right, yet allowing a genuinely warm smile escape from time to time. Within a few minutes of small talk Sara has you feeling like a neighbor.

I joked to Sara about hearing her back-up band rehearsing across the hall, only to find out that this was half-accurate. The event was actually the 128th Annual Festival of the New York Staff Band of The Salvation Army (wow – they've been together even longer than the Stones!) featuring 'special guests' conductor and composer Bramwell Tovey and Sara Groves!

The concert opened with the impressively massive sound of the Salvation Army Staff Band, which produced grand, sweeping compositions that usually included passages of familiar hymns. Bramwell Tovey was guest conductor and served as the host for the evening, frequently injecting humorous observations into his banter.

Sara was introduced to perform her first short set of songs – backed by Troy on drums and percussion and Fabbrini's solid, supportive bass, Sara's piano and voice brought a tenderness and humanity to the stage. In stark contrast to the majestic bigness of the brass, Groves brought out the frail humanness of our condition with her emotionally-honest performance and self-deprecating humor. I'm sure that "When The Saints" will never sound more appropriate. 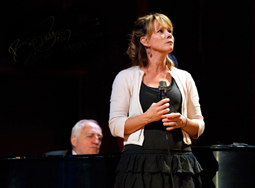 Returning after another performance by the salvation Army players, Sara performed another band-only set including "The Long Defeat" and other great classics from her catalog, and then was joined for several songs with tasteful back up from the Salvation Army brass (so I was right, after all!). "He's Always Been faithful" sounded like it was written for this treatment, as "Great is Thy Faithfulness" swelled with subtle
brass on the instrumental bridge. Giving up the piano stool to Bramwell Tovey, Sara stood, microphone in hand, and delivered a stunningly beautiful performance of "Why It Matters," from the Add To The Beauty album. 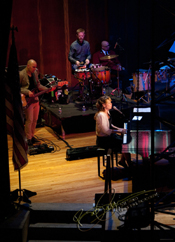 Performing a mixed set going all the way back to Conversations (including the title-track to that fine project), Sara was the polar opposite of a diva, choosing to offer honesty from the soul and heart, unconcerned about posturing or fan-worship. Never sharp or flat, her voice is pure and free from affectation, the anti-American Idol. No over-the-top phrasing or vocal gymnastics – Sara Groves shared from her spirit, sounding like no
one other than Sara Groves - and we were touched.
I'll take that any time..