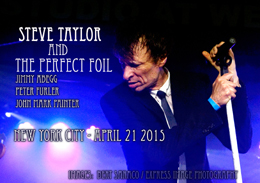 Rock and roll has had a sort of mini-tradition of successful, well-known musicians coming together to create new music that would, presumably, be a hybrid of the best that they brought to their former endeavors.

Rock and roll has had a sort of mini-tradition of successful, well-known musicians coming together to create new music that would, presumably, be a hybrid of the best that they brought to their former endeavors. Crosby, Stills, Nash and Young, Blind Faith and The Traveling Wilburys immediately come to mind, but how about ...Steve Taylor and The Perfect Foil?

Who?
Glad you asked – because Steve Taylor and The Perfect Foil is about as close to a super-group (as these collectives are often referred to) as you'll find emerging from the mysterious musical ghetto often known as CCM.

time, concentrating on film directing and other non-musical projects) had his legions of hungry fans pretty much resigned to the fact that the lanky, manic performer who often acted as the raucous musical conscience of the established church, was finished – done – period, end of story. 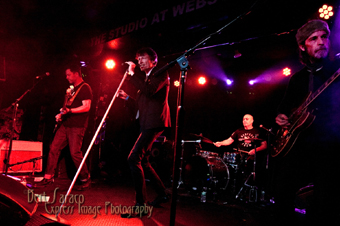 Okay – so we were wrong. Now he's back with a new group and a new album, Goliath.

So who are these CCM superstars?
Once upon a time there was a phenomenally talented writer/multi-instrumentalist and his wife. They made music. They were called Fleming and John (because those, after all, were their names). Fleming and John made two albums that remain as legendary monuments to everything good about alternative, quirky, creative rock and pop. They transcended all labels and boundaries. Their fans have been missing them for more than a decade and a-half. John is John Mark Painter.

One of Contemporary Christian Music's biggest, most commercially successful groups has been (and still is) The Newsboys – or just plain newsboys ...depending on the current press release. During their brightest period (at least to these ears) the band's front-man was a shaved-headed Australian with a wild look in his eye. I don't think he's from the outback but he's definitely 'out-there,' if you get my drift. His name is Peter Furler – he walked away from the comfort of the successful newsboys brand some six years ago. 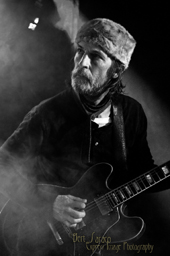 A long time ago in a musical galaxy far, far, away – in a time when creativity was still allowed in certain music industries, there was a group known as Vector. A vector is a path. This group of musicians created a path of their own. Their brilliant guitarist and resident canvas painter was Jimmy Abegg. Vector has been gone for a couple of decades.....

Establishing shot: New York City, 2015 – A youthful forearm fills the frame as a sleeve is hiked up enough to have a blue wristband quickly wrapped around a young concert-goers wrist. The camera pulls back and tilts up to the marque of The Studio at Webster Hall.

Close-up: Tonight – Steve Taylor and The Perfect Foil. Apparently, the prayers of hoards of music fans have been answered because – aside from one obvious participant ('tall guy name of Steve) the band is made up of the aforementioned John Mark Painter (bass), Peter Furler (drums) and Jimmy Abegg (guitar).

The opening act, Lost Lion, performed a solid, compact set of economically-played rock. They were well-received by the crowd and showed proper respect for what they knew everybody was really waiting for. The unique and appropriately 'out there' vibe of Danielson (Daniel Smith) and The Nine-Fruit Tree was the perfect choice to accompany Taylor and friends on this tour. 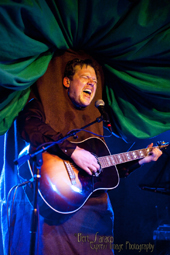 For the uninitiated, this incarnation of Daniel Smith's art features Smith performing from inside his nine-fruit tree construction – a tree 'costume' that barely fit onstage, the top of the tree bending slightly beneath the ceiling.

Smith's arms and face emerge from the tree as he sings and plays a guitar (mounted in front of the tree). The songs are staccato anthems that sound like they came from the soul of a child – and didn't someone in the Bible say we were supposed to become like one of those if we expected to get into The Kingdom? Smith's unique vocal style and liberal use of audience participation had the crowd eating out of his hand. Or his branches – whatever. My favorite moment: Smith thanked his wife, Elin, who stood at the side of the tree, singing along and providing percussion, for having the courage to be on stage with him and she affectionately patted the tree. ...okay, so I thought that was kind of nice. Strange, but nice.

In his previous musical lifetime, Taylor produced clever, catchy, new-wavish music with lyrics that often pointed a finger at the foibles of the church and/or dealt with more universal spiritual issues. His humorous edge kept him from being labeled as an angry prophet and, even though the lyrics cut deep, the tunes had a good beat and you could dance to it. These days the dancing is a little more frenetic and the spiritual edge is less obvious and the band rocks harder than ever. 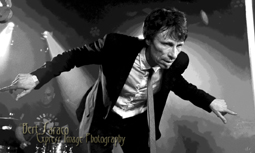 The Perfect Foil started explosively with "Only a Ride," from the new album. "If it's only a ride, Why am I bleedin'?" Taylor's primal scream of a vocal cuts through the wall of sound created by Painter, Furler, and Abegg like a knife. For those wondering if Taylor's performance is as manic as it was in his younger days, it isn't. It's even more manic, if that's possible. The pole-like microphone stand seems almost reinforced to serve as a launching mechanism as the singer sometimes hangs onto it, careening off to the side, performing vertical leaps and generally using it as a dance partner (yes, I guess he's a bit of a pole-dancer). Steve's body quakes, jerks, squats, runs and generally creates havoc across the stage, the spectacle sometimes overshadowing the fact his vocal performance is excellent – never flat or sharp, the vocals are right where they belong, perfectly executed amid the chaos.

Painter's powerful, growling bass, Abegg's textured, funky guitar work, and Furler's solid, no-nonsense drumming more than make up for the lack of the keyboard and sax of Taylor's previous bands. This is more of a hard-core rock sound and the three piece back-up is more than equal to the task at hand, playing Steve's 'oldies' ("I Want to Be a Clone," "Am I in Synch," "On The Fritz") with a harder edge, making them – in some ways – even more potent than the original versions. The audience did their part, coming in on cue where needed and singing along to the older songs and doing just as enthusiastic a job on the new material.

Steve Taylor and The Perfect Foil play serious music with a good dose of humor and a refreshing lack of pretentiousness. There's no rock-star posturing here. When Taylor mentions that the band is offering the new album on cassette as well as a special Perfect Foil 'fragrance' at the merch table, it's offered with a comic sincerity that suits this unique group of musicians well and somehow makes sense. At the same time, songs like the pulsing, intense "Comedian," from the band's debut album, Goliath, which was followed by the equally brooding "Finish Line," show that they can deliver a heavy, serious vibe as deftly as they can rock the roof off. 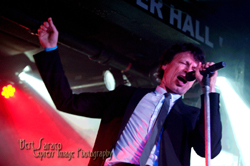 In an effort to avoid spoilers, I'll just say that the band's encore set started with a most unexpected cover-tune that was as strange a juxtaposition of performer and song-choice as I've ever seen. Of course, it worked... Less unexpected, but performed in a 'spooky' mode, was "Cash Cow," and then the hoped-for "Jim Morrison's Grave." "Hero" ended the show with a grateful, enthusiastic crowd giving the band a well-deserved extended applause, buttressed by shouts, screams, a good amount of stomping and flailing limbs.
...and by limbs, I mean like arms. Not branches.

-words and images by Bert Saraco