New York City's Bowery Ballroom is almost invisible at street level – it's only once you enter, go down the stairs, and eventually back up to the concert space that you realize how much more there is to the place than meets the eye. Kind-of like the headlining act of the night – Eisley. 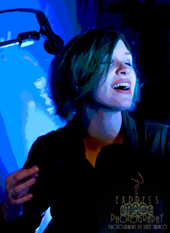 The main attraction of the band is unquestionably the three sisters from Texas – Stacy, Sherri, and Chauntelle - and, like the venue, they deliver more than what meets the eye. That's not to say that there's no visual appeal – these sisters all share good looks and a quirky sense of style (echoed by several audience members with electric blue and magenta hair), but produce music with more raw power, complexity and passion than 'girl groups' are usually expected to deliver. The fact that it's a family affair, with brother Weston on drums and cousin Garron on bass, would tend to make the more cynical among us question the band's viability as a rock 'n roll unit. That would be a mistake.

The successful indie band certainly has a sound of their own, with a unique style and front-line vocal timbre that's specifically Eisley. The family element comes into play in unique vocal phrasing and even the pronunciation of words in a lyric. It's a unifying aspect of their sound that features in the individual vocals and especially in the tight harmonies. The songs are engaging, melodic and occasionally trance-like in their drive and intensity. There are echoes of classic rock – certainly some influence from The Beatles – and a hint of surrealism about the words and music. 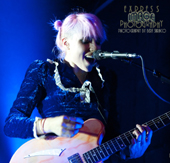 Under the mostly blue and magenta stage lights, the band performed a diverse set  culled from their entire catalog, reaching all the way back to their first album, Room Noises. Weston's drumming remains interesting and textured, more about composition than simple time-keeping. Garron's bass lines are melodic and strong. From left to right, as we look at the stage, Chauntelle plays strong guitar lines and is obviously wrapped up in the music, Stacy anchors the center, at the keyboard but with a guitar also at the ready, and Sherri, guitar hanging between her arched body and the mike stand, communicates emotionally, singing and playing as if she desperately wants you to know how she feels.

Together, the five members of Eisley produce a visceral but elegant sound, grounded by good songwriting and executed with passion. The show is streamlined – no special effects or choreography - just the songs – and that's enough. 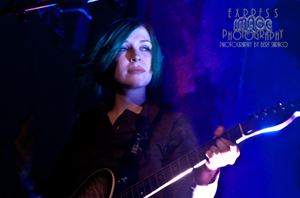 Opening the show was Merriment – yes two more Dupree siblings, bringing the total number of brothers and sisters onstage this night to six, and a cousin thrown in for good measure. With Collin on electric guitar and Christie on vocals and acoustic, Merriment runs the risk of being dubbed 'Eisley lite,' but despite that family voice, there are differences.

Merriment, whose full-length debut, Sway, released the night of this concert, has a more folk/pop oriented approach (at least they did at this show) and less of a rock edge than Eisley. 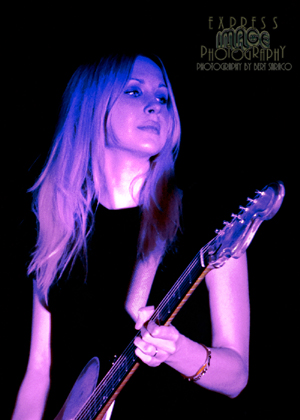 The Dupree sisters that we first heard singing about "Marvelous Things" and a place called "Trolleywood" some nine years ago are pretty marvelous themselves in a place called New York City. A lot of water has passed under the bridge and those girls (and boys) are now women and men making some pretty compelling rock and roll on a Tuesday night. 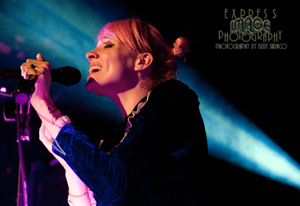