The streets of New York City can act as a wind tunnel on those cold, wind-swept winter nights, and February ninth – the night Transatlantic's Kaleidoscope tour hit The Highline Ballroom – was no exception. “Doors open at 5 PM” was what the promotion said, and the line stretched two long city blocks well before that time. The fact that the venue didn't actually open its doors till almost an hour later than promised was highlighted by the predicted snowfall arriving well ahead of schedule. Those lucky enough to get some of the coffee being handed down the line watched the snowflakes melting into the black brew while those closer to the back of the line got little more than a whiff of the rumored free java. It would be the hope of hours of world-class progressive rock by international progsters, Transatlantic that would keep our souls (at least) warm until the doors would actually open.

Thankfully, Transatlantic was hot - and the accumulating snowfall was quickly forgotten as Neal Morse (ex-Spock's Beard / Flying Colors), Roine Stolt (The Flower Kings), Pete Trewavas (Marillion, Edison's Children), Mike Portnoy (ex-Dream Theater, Flying Colors), and Ted Leonard (Spock's Beard, Enchant) filled the room with intricate, emotionally powerful and virtuosic performances. Playing “Into The Blue,” “Shine,” “Black as The Sky,” and “Kaleidoscope” (from their just-released project of the same name), “My New World” and “We All Need Some Light,” from their debut album, and a comprehensive medley from Whirlwind, the band brought an emotional intensity to the almost-three hour show, occasionally offset by the light hearted banter of Portnoy, who – on this night – had his drum kit on the far right-hand side of the stage, facing and playing off of his frequent musical partner, Morse. 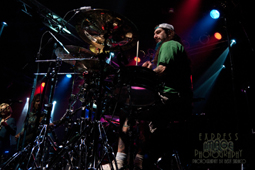 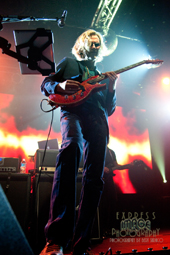 Sprawled across the Highline Ballroom's stage, Transatlantic played in front of the venue's huge screen, which illustrated the lyrics with colorful imagery. The house sound supported the layered music and vocals smartly, revealing a well-rehearsed musical unit that had everything down, from ensemble playing, to solos, to individual and harmony vocals.

Morse's passion about the music is palpable, and his playing – whether on the keyboard or guitar – is precise and energetic. Roine (pronounced 'Roy-nuh') Stolt is the visual centerpiece, his lanky form topped by a mop of straw-colored hair – his Zappa-like guitar tones ringing out stirring solos as his body arcs and bends with the notes. Trewavas (suggesting a bass-playing Bilbo Baggins, if the Hobbit was a bass player for a Middle-earth prog band) slaps out precise, distinct bass lines that anchor the music and hug every musical curve in the road. Book-ending, across from Morse, Portnoy flails away at his kit, sometimes standing to his feet, singing, beating out rhythmic patterns that would intimidate most other drummers, and playing the congenial host at the same time. Filling out the sound and adding to the vocal mix is Ted Leonard, mostly in the background but playing an important role, not only on vocals but on guitar as well.

The fact that this was the weekend that the world was celebrating 50 years since The Beatles had their American television debut on the Ed Sullivan Show was not lost on Transatlantic – in particular, Neal Morse and Mike Portnoy. In one of several shout-outs to the New York audience, Portnoy pointed out that the seminal Beatles event took place on this weekend, in this city, in a theater just a short number of blocks away. An impromptu Beatles-challenge between Morse and Portnoy ensued, resulting in several mini Beatle covers and Portnoy proclaiming “this might be Yellow Matter Custard II,” referencing the notorious live album of Beatle covers spearheaded by the two musicians.

Getting back to business, Trewavas' bass suddenly disappeared from the mix, prompting several minutes of on-stage tech work that seemed unable to bring the bass back to life. A lesser professional might have 'gone diva' and marched offstage in a huff but Trewavas exhibited grace and patience through the whole ordeal. Breaking the tension, Portnoy started one final Beatle cover to sum up the situation before the band exited the stage while the sound issue was dealt with - “Help!” 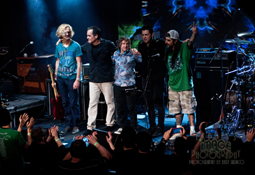 With a now-working bass, the band played on, leading, as concerts do, to the end of the show. And the generous encore of “All of the Above” and Stranger in Your Soul”. By the time the night was over, the crowd had absorbed the promised massive dose of prog and was happy for it. Facing the accumulating, messy snow as we exited the Highline Ballroom, the Standing Room Only crowd hardly noticed the cold but did indeed remember that, like the song said, we all need some light – and that would come soon enough. 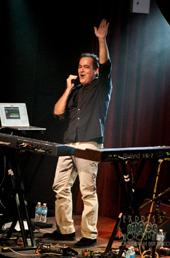