A singer-with-acoustic guitar appearance from someone who really delivers.

It wasn't that long ago that you may have read me kvetched some in this publication about the surfeit of singer-with-acoustic-guitar acts appearing at a benefit concert I attended  for a Christian coffeehouse in my state. That kind of set-up can get more than a mite samey in less than agile hands. But you won't see me grousing about the same kind of performance from JJ Heller. She and her husband ply the same kind of trade better than many.

It's unclear to me whether she usually performs in such a spartan congfiguration, but the combination of her on vocals and her other half strumming, picking and occasionally adding background vocals at her side worked well. Not only did the minimal accompaniment draw attention to her fragilely emotive, often conversational alto,  the couple abetted each other as comedic foils in their stories of life together, as parents and in relating some songs' inspirations. Husband Dave has a bit of the mischeivious impishness of Tommy Smothers, while his headlining wife has a bit of a faux self-deprecating  Elaine May air about her non-schtick schtick (it can't be schtick if it's all born of real life, right?). 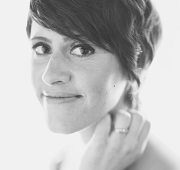 Part of her appeal, providentially abetted in her rise to national prominence with by music being used on Fox TV's So You Think You Can Dance by a contestant, is the manner in which she can sing Gospel truth and Godly precepts in an disarming,  unaffected manner that doesn't come off as preachy nor cut from the CCM cookie cutter. Credit some of qualities to her partner's frequent co-writing credits on her material and their living far removed from Nash Vegas in Phoenix. Their home base provided a bit of humor in terms of the Christmassy nature of some of the concert and their inability to enjoy the holiday with snow.

Though billed as a Christmas concert, the percentage of songs related to the festivity wasn't that high. JJ began the night with their own "The King Has Come," the first of a few times she added some harmonica to Dave's accompaniment. In a kind of reverse-Chris Tomlin move, their "Star of Wonder" adapts most of the words to "We Three Kings" to a fresh, major key melody. Ending their 16-song show with an audience sing-along to that closing-line-of-the-first-verse-of-"Oh, Come All Ye Faithful"-turned-praise-chorus, "O Come Let Us Adore Him."

Children, the Hellers' own cute daughters especially,  figured into their set list as well. JJ's next album is to scheduled to be a collection of lullabyes written for for their young'uns, such as "I Dream Of You" and "When I'm with You, " the latter featuring a break-in from hubby to say that a line wherein their daughter's described as "sweeter than strawberry pie" to be the couple's least rock'n'roll  moment. "The Boat Song" derived from cardboard book kid lit classic The Runaway Bunny, about a baby rabbit who can't escape his mom's affection. If the storyline parallels her own maternal love as well as God's for His people, it's certainly no accident.

Her more grown up numbers can be as moving or more so. That Dance selection, "Your Hands," is certainly evocative, but others among her catalog can move me to tears, such as the utterly vulnerable "What Love Really Means" (with its  "who will love me for me" chorus) and "Who You Are," wherein missed opportunities become occasions of divine assurance. Anyone desiring for a slightly less tear duct-opening doctrinal affirmation that could be a distaff counterpart of Rich Mullins' "Creed" would so well get an earful of "I Believe," too.

Those moments of gravity were counterpointed by levity that came oftentimes from the Hellers' parental roles. One daughter wants to hear a song from 101 Dalmatians more than the song her mother write for her. The other one rates cheese above her dad. But, it's all good, and the 'rents in question can smile over the memories they share with a crowd of a few hundred strangers.

Between their two sets, the Hellers gave a pitch for World Vision, the charity through which they've sponsored three underprivileged children (and counting?). Touring sponsorship /partnership isn't out of the ordinary in cCm circles, but the couple's commitment to a sponsor/partner may be;even in their leaner days of living on, as JJ pointed out, Rice-a-Roni and cheese quesadillas, they budgeted to provide for at least one youngster overseas through World Vision. That admission likely prompted a good many attendees to consider picking up in the narthex one of the envelopes with profiles of children  who'd benefit from WF's ministry. It should probably also be noted as well that the pitch was made without aid of video supplement,  as is so often the case in this kind of concert settings.

Public school art teacher folkie Josh Calhoun and The Eclectics made for a musically  sympatico opening act. A remake of the Impressions' "People Get Ready" minus a verse or two and apparent recontextualization of Curtis Mayfield's lyrics was no way to impress me, but they fairly won me over by the end of their nine-song set. Instrumentation including Calhuon, raised in a home that hosted acoustic house concerts, on acoustic guitar, a  married couple comprised of a husband on stand-up bass and his wife alternating between accordian and various hand percussion instruments and a tall, bald man behind a drum kit went a good deal toward that wining over. The occasional awkward lyrical turn on some of the band's own material distracted some. A breadth of repertoire encompassing jazz standard "The Nearness Of You" and Southern gospel oldie "A Little Talk With Jesus"  mixed with a couple of Andrew Peterson remakes and seasonal fare including "In The Bleak Midwinter" and a non-salacious re-imagining of "Baby, It's Cold Outside" for married couples (its moral: buy your wife an appliance for a Christmas present at your own peril) went a fair way in making up for  thew aptly-named Eclectics' low points.