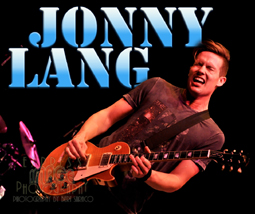 In Westbury, New York on a Thursday night in November, Lang and his band launched the show with "Blew Up the House," the lead track from his current project, and an apt description of what the band was about to do to the NYCB Theatre. The band then slammed into the powerful "Freight Train" like, well – like a freight train. The broken guitar string half way into the second number was no surprise. Like I said, apparently Jonny's guitars like it rough. 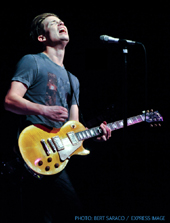 show-stoppers like "Turn Around," which went as far out as a song can go before returning to earth with a solid coda that shook the audience to its shoes, "Red Light," which was as much a desperate prayer as a song, and the tour-de-force band version of Stevie's "Livin' for the City," with Dwan Hill taking it seriously to church with his organ solo.

Lang's playing is amazingly emotive and gutsy, not pretty. The guitarist attacks the strings, bending them to the popping-point, straining the neck of the instrument, producing a stunning vibrato and exploding into riffs that seem to come up from unspeakable depths. Certainly not a squeaky-clean player, Lang takes risks, reaching impossibly beyond even his impressive grasp, producing exhilarating moments of guitar playing.

The emotional input of Lang's intense vocals, as articulate and expressive as his guitar work, drive the songs to another level as his facial expressions vary from anguish, to pain, to ecstasy – perhaps mirroring the path of his own life. Early success gave Lang an open door to the excesses of sex, drugs, and rock & roll but today his faith and redemption are very much a part of his performance. "That Great Day," coming close to the end of the show, was full of a passion that so palpably on display that it no-doubt reached every seat in the venue.

Switching to acoustic guitar for the encore, a solo Lang stepped out to the circular stage (the room is in-the-round, although the back third of the hall was curtained off for this show) for "Lie to Me," a crowd favorite. He wasn't alone for very long though, as Anton and Alexander joined Lang to end the song as a blues trio, soon followed by the rest of the band to end the show full-strength. And the Jonny Lang band full-strength is, indeed, a freight train.