Walker, Dave – How to Avoid the Peace

Dave Walker’s latest cartoon collection may be sub-titled ‘Tips for Advanced Churchgoing,’ but you don’t have to be an Anglican to enjoy the humour. It will help you to catch the subtleties, though. His understanding of the ordinary person in the pew pours out of these drawings.

Obviously, there is humour in his work – these are cartoons – but it is remarkable how much compassion, coaching, caution and common sense come across in it too, especially considering how simply his characters are drawn.

His compassion is often directed at off-put visitors and even more at over-worked clergy. His time-line cartoon “The Interregnum,” starts with an outgoing vicar hugging a parishioner goodbye, and then immediately on day one, the chart states, “The old vicar must stay away from now on.” While the policy is there to help incoming clergy, Walker (no relation) spotlights how its emotional coldness ignores the impact on friendships when vicars change job.

Similarly, the second of his works on “New Curates (Their Tasks)” shows the practical jobs they have to do, but ends with two people sitting and talking, captioned, “Changing the World.”

Many of the common sense points he makes are less sympathetic, such as the irrelevance of historic legacies we have collected in the UK, regarding buildings. “The Time the Bishop came to Bless the Churchyard Fence” is one.

By highlighting the awkward situations visitors can find themselves in (he shows no mercy to audience participation) Walker cautions the ordinary church member against being insensitive.

But Walker’s job is raising chuckles, and churches lend themselves to oddity, if not the extra layer of surrealism that he creates.

That surrealism hits the heights by page three, where he reveals what really goes on in the pews. Walker divides a page into two halves: the top one is “What the vicar sees” – a view from the pulpit – while underneath, he draws the same church viewed from the side: “Actual activities.” Behind the pews, he shows tunnelling, making homebrew and even “Running a small Bed & Breakfast.”

In “Lofty Tasks” he asks the first question we all ponder as soon as we wake each day: ‘Can churchwardens be replaced by drones?’

The hilarious “Supply Clergy (When Congregations Misbehave)” takes tricks that schoolchildren play on supply teachers and translates them into a church context.

Similarly, he spoofs elections in “The Hustings (Potential Church Council Members explain their Polices).” Three candidates answer questions on the church versions of economy, education, environment and immigration. Candidates’ responses include exploring the churchyard’s fracking potential and banning refugees from other churches, “They are taking our pews and drinking our coffee.”

He has two ingenious ones with journeys to trace. Those with OCD may wish to find their way through the hard-to-crack hedge maze at the church exit in “Christmas Churchgoers (How to get them to attend the rest of the year),” while church leaders may recognise the journey of “The P.C.C. Meeting” from opening prayers to closing prayers cleverly drawn as a London tube map.

His humour is often gentle, as shown in his spoof of Alpha courses: 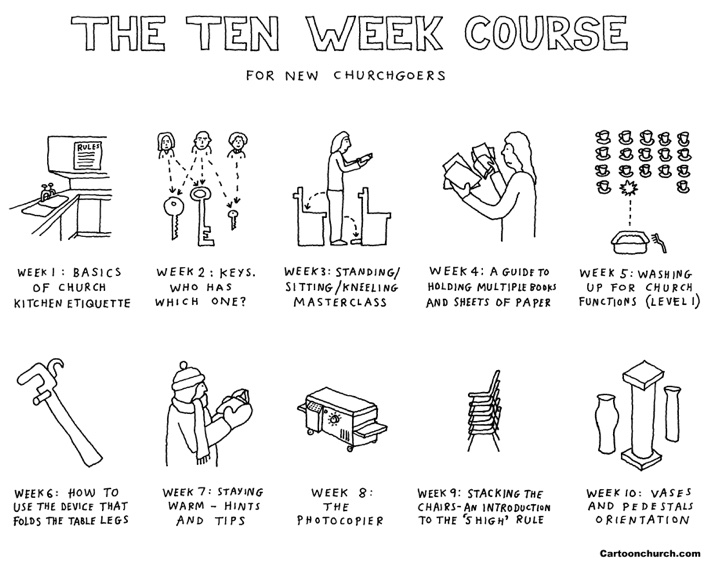 But mainly, he is plain funny. “Preachers (Ways to make an overenthusiastic one stop)” draws a graph, where the horizontal axis is time and the vertical axis is desperation. You could hardly get a more typical Dave Walker cartoon. It has British understatement side-by-side with surreal exaggeration, plus tongue-in-cheek detail.

Whether it is his obsession with church cupboards and their contents; what churches can learn from sports; cassocks suddenly becoming popular at football matches; or just exaggerating people and situations in our own churches in a way that we will recognise, this is a lot of fun. Clever, thoughtful, compassionate and observant, yes – but still great fun.