Sure, Colorado has had its problems lately - but four ambassadors from the Centennial State brought some music and good times to NYC on this balmy evening in July...

Sure, Colorado has had its problems lately - but four ambassadors from the Centennial State brought an hour or so of music and good times to the narrow canyons of Lower Manhattan on this balmy evening in July. Returning to The Rockwood Music Hall, where the band played four months earlier, SHEL (Sarah, Hannah, Eva, and Liza Holbrook) took to the stage at about 7PM and helped a room full of work-weary New Yorkers escape for a while into a musical place that created an environment all its own, seeming to ignore calendars, politics and geography. 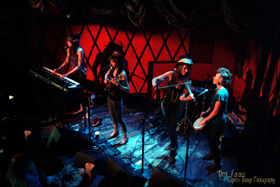 Yes, the music of SHEL is somewhat transporting – which is a great thing for New Yorkers. Performing on the Rockwood stage - which emerges from the far side of the small room, curved at the 'footlights' and festooned with draped red curtains - Sarah, Hannah, Eva and Liz (the first letters of each name give the band its name) fit right in, dressed in their usual retro/vintage/hip feathered top hats, vests, and jeans.

If current fashion trends are ignored by SHEL, so are current musical trends – and that's one of the reasons they're so appealing. Their sound is their own, with no discernible compromise toward gimmicks or commercial concerns. Combining elements of classical, pop, jazz, country and folk, the four musicians offered mostly selections from the engaging music featured on their first full-length self-titled project (releasing August seventh).

From the stage came interesting vocal interplay and tight harmonies, the vocal closeness of these sisters making it all sound that much sweeter. Set up from left to right onstage, electric piano (Hannah), mandolin (Eva, who also sings lead vocals), violin (Sarah), and percussion (Liza) came together with excellent, well-balanced sound. Between-song banter was well received by the usually-jaded New York audience, obviously won over by the unassuming but obviously enormously-talented quartet in front of them. 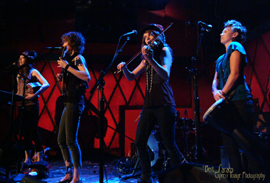 SHEL's music is melodic and hooky, often complex and always well-structured. Performing a night of all original material (except for their cover of "The Battle of Evermore," by Led Zeppelin. Yes – I said Led Zeppelin), is a daunting challenge - but SHEL's music, for all of its underlying sophistication, is easily accessible and immediately likeable. Fortunately for them, there's enough solid foundation to these songs so that they hold up to repeated listening. 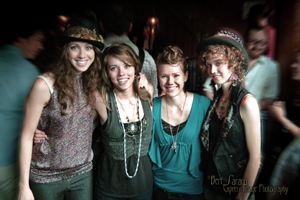 Musicianship always speaks for itself, and these young women are as tight and precise a musical unit as you'll find anywhere. There's no sloppiness and no shortcuts taken on the live performance. Even without the aid of a bass player and a full drum kit (Eva played the djembe and offered some vocal percussion), the music was full, layered, and satisfying.

Did I forget to say that these four young ladies are charming? They are - they'll win you over. And, yes, by the time the show was over it somehow felt like family.

Find out more about SHEL at www.shelmusic.com and look for their full-length debut project at Amazon, CD Universe and all the usual places. And don't miss them when they play in your area!