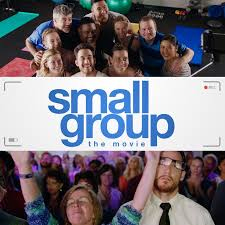 The bottom line is, you care about the characters, which is what good storytelling is all about. For anyone who’s heard the phrase, “let’s do life together,” and cringed a little - I think you’ll get this film…

“O wad some Power the giftie gie us, to see oursels as ithers see us!"

With Scottish poet Robert Burns’ quote in mind, the very title of this film, Small Group: The Movie, is a tip-off to millennial church-goers - a signal telling them that someone on the inside is telling a story that will resonate on some level with their own experience. In fact, Small Group is a movie about the ‘inside’ - but as seen from the outside. As the modern evangelical church becomes more and more ‘culturally relevant’ and technologically savvy, it increasingly takes on a vocabulary particular to its own demographic. If that sounds to you like fodder for an investigative report, you’ve found the key to Small Group: The Movie.

This is the story of Documentary filmmaker R. Scott Cooper (Sterling Hurst), whose very reasonable idea to do a documentary film about modern young evangelicals, goes awry as he sells out to the producer, Ballard (Robert Riechel Jr.), whose goal is to create an expose of the ‘dark side’ of the church. With a wife, Mary (Emily Dunlop) and young child, Casey (Copelyn Chastain), to provide for, Cooper agrees to go undercover - complete with high-tech hidden recording devices - to infiltrate a small group from a local Georgia church. Cooper connects with the men in his group on a retreat and eventually gets called upon to substitute for one of the band of ‘brothers’ on a missions-trip to Guatemala. Cooper’s goal is clearly to document some condescending ‘Christian hypocrisy’ in action. The events of the trip are indeed eye-opening for the young documentarian, but not in the way he expected. Meanwhile, at home, Mary experiences a crisis with her pregnancy and an unexpected bonding with some of the women in the group. Without giving away the details, Cooper comes back home with a new attitude but also to the revelation that the agenda-driven Ballard has released a ‘teaser’ for the documentary as he envisions it, which goes viral and ‘outs’ Cooper to the rest of the small group, leaving the film-maker in an emotional/spiritual/moral quandary between his friends in the small group, his family, and the future of his career.

Based on the trailers and clips I first saw, I thought that Small Group: The Movie was going to be a comedy - and there certainly are comic moments. In fact, the idea of a documentary about the modern church had all of the comic potential of The Office (think 2009’s satirical look at the CCM industry, Jesus People,). The very appealing performance of Sterling Hurst as Cooper even has strong notes of The Office’s Jim Halpert, and at least one clip featured one of the men of the group channeling Andy Bernard as he puts the final OK on what will become Cooper’s official nickname - his mock-judicial proclamation, “gavel!” was very And Bernard-like. Of course, the moment in the trailer when the pastor asks the congregation to “open your Bibles to John, chapter thirteen,” to a resulting cascade of laptops and cell-phones lighting up the dimly-lit room is brilliantly funny and insightful - even if it’s also a call-back to an episode of the office. Matt Chastain, who not only played Shane, the ‘comedian’ of the group, but also wrote and directed this film, must be a true comedy aficionado, even throwing in a bit of an homage to Blazing Saddles in one scene - no spoilers here...

My point in all of this is that if you go into Small Group: The Movie expecting a comedy you might be surprised to discover that it’s ultimately much more of a drama, and quite a good one. Maybe a re-edit on the promotional clips might be in order. Thankfully, the too-often clichéd dramatic patterns of many Christian films are avoided here in favor of a more nuanced unfolding of the story. The performances range from good to very good on all parts, with special kudos going to Hurst and Dunlop, who undergo the biggest emotional transformations without resorting to histrionics. The supporting cast all do their jobs very well, none appearing to be unbelievably ‘churchy,’ or hand-rollingly evil - well, the producer does come close to being a bit over-the-top as the film’s bad guy and his trailer comes too close to parody, but after all - he’s a producer (just kidding, producers).

The film is well-paced, has good editing, good production values and cinematography. While the film seemed a bit dry at first, it steadily improved until - after the first half-hour or so - it became an engaging, well-told story that did in fact pull the viewer in. The bottom line is, you began to care about the characters, which is what good storytelling is all about. For anyone who’s heard the phrase, “let’s do life together,” and maybe even cringed a little - I think you’ll get this film. I found that I ‘knew’ some of those characters in the men’s group - especially the comedian of the bunch. There are many commendable aspects to Small Group: The Movie - but going into detail would definitely produce too many spoilers. At any rate, you can safely go into this Small Group without having to worry about being hit over the head with a Bible - or being chased down by a greeter trying to ‘love on you’ with a too-big smile.

The War With Grandpa

People may be taking notes for the next April Fool’s Day.

Every Day Is Something Different

God of the Piano

The Price Of Fame